In an apparent shot at the crypto community’s ethos, Agustín Carstens said that trust can never be outsourced or automated. 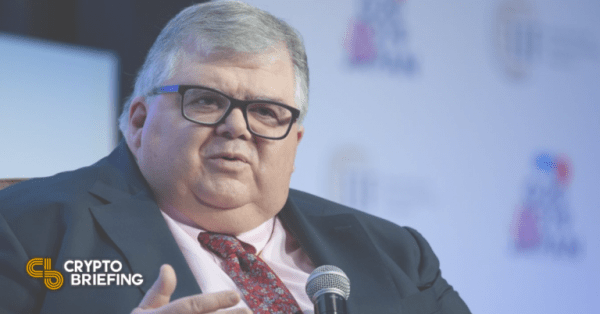 Agustín Carstens, the general manager of the Bank for International Settlements, has argued that cryptocurrencies and decentralized finance are inherently risky and that “when a crash happens and money is lost” users will inevitably “turn to a trusted and experienced party—the public authorities.”

BIS Chief: “The Soul of Money is Trust”

According to the general manager of the Bank for International Settlements, Agustín Carstens, sound money should not be based on trustless, permissionless, and anonymous ledgers, but on trust, and more specifically—trust in central banks. Speaking at a Goethe University’s conference on “Data, Digitalization, the New Finance and Central Bank Digital Currencies: The Future of Banking and Money” on Tuesday, he said:

“My main message today is simple: the soul of money belongs neither to a big tech nor to an anonymous ledger. The soul of money is trust. And central banks have been and continue to be the institutions best placed to provide trust in the digital age.”

The statement from the head of the BIS goes against the what many believe are the central ideas for which the cryptocurrency movement stands. Decentralization, or the elimination of intermediaries, is one of the top value propositions of cryptocurrencies. They operate under the assumption of “don’t trust, verify.” The anonymous creator of Bitcoin, Satoshi Nakamoto, made this objective abundantly clear in the Bitcoin whitepaper: “We have proposed a system for electronic transactions without relying on trust,” they wrote in the conclusion.

The BIS is a supranational financial institution founded under an international treaty on May 17, 1930. It is often dubbed “the bank for central banks” because it serves central banks in ways similar to those in which commercial banks would serve retail clients. It is a powerful institution that collects and processes data from over 63 central banks and exerts influence over the monetary policy of sovereign nations. It is governed by unelected officials and operates under legal immunity.

Carstens said that in today’s two-tiered monetary system, central banks provide an open, neutral, trusted, and stable platform. Private companies, he argued, use the ingenuity and dynamism of central banks to develop new financial products and payment methods. This was a powerful driver of innovation and welfare, he added, but some recent developments in the private sector could “threaten money’s essence as a public good, if taken too far.”

More specifically, he pointed at digital innovations, such as stablecoins issued by big tech companies, as well as the rise of decentralized finance. On the former, Carstens spoke about the dangers of big tech companies cornering the payments market and cited market concentration, privacy, and accessibility risks.

He further stated that big tech companies have achieved systemic relevance in several economies and that this trend could accelerate if one of these companies created a dominant, closed ecosystem around their own global stablecoins. “Once established, a company is likely to erect barriers against new entrants, leading to market dominance, data concentration, and less competition,” he said.

According to Carstens, global stablecoins issued by big tech firms could disintermediate incumbent banks, pose risks to financial stability, and fragment national and global monetary systems. Stablecoin issuers also pose privacy risks, as they collect vast amounts of financial data on their users. Elaborating on this point, he said:

“Moreover, it is possible that the data holder ends up knowing more about users’ behavior than the users do themselves. Armed with exclusive access to data, big techs can quickly scale up and dominate markets.”

The general manager of the “bank for central banks” seems to believe that only central banks should be trusted with the responsibility of collecting vast amounts of financial user data. According to a 2021 BIS working paper on big data and machine learning in central banking, central banks’ interest in big data has increased considerably over the last few years. Currently, over 80% of central banks collect and use big data for research, supervision, and regulation, up from only 30% in 2015.

On the topic of decentralized finance, Carstens pointed to a recent BIS research paper that argued that full decentralization in DeFi was an illusion. He conceded that decentralization can be a noble goal, but expressed doubts concerning DeFi’s execution on this promise, claiming that “this principle [decentralization] is not what DeFi applications are delivering.”

Carstens also argued that decentralization had certain costs and cited high transaction fees, or rents. “These rents [transaction fees] accumulate mostly to insiders, such as Bitcoin miners, or those who hold more governance tokens,” he said, adding that many protocols entrench insiders since those with more coins have more power.

According to the BIS chief, DeFi offered no efficiency gains for average users; it only meant higher costs for users and spectacular returns for insiders. It also suffered from the same vulnerabilities of traditional finance, including high leverage and liquidity mismatches. Carstens argued that people would eventually turn to trusted authorities to seek help due to these drawbacks and vulnerabilities. He said:

“When a crash happens and money is lost, users will inevitably turn to a trusted and experienced party–the public authorities–to tame the unleashed spirits and restore order.”

Finally, Carstens said sound money should not be based on anonymity but on identification and trust. And trust, according to Carstens, “can never be outsourced or automated.”

Analysts note parallels with March 2020: Will this time be…