The story between cryptocurrency exchanges Binance and FTX has quickly unfolded and caused havoc in the crypto market, here’s a breakdown of where it began and where it is now. 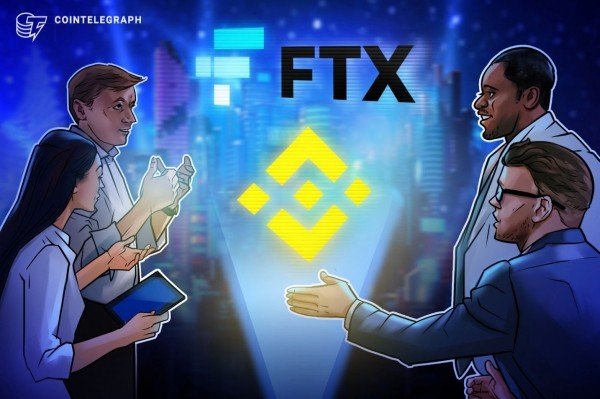 All dates are Coordinated Universal Time (UTC). Updates are in reverse order —the latest updates are at the top.

It cited “public statements suggesting that clients’ assets were mishandled” as the reason for the freeze and determined the “prudent course of action” was to put FTX into provisional liquidation. The Bahamian Supreme Court appointed a provisional liquidator and FTX assets can’t be moved without their written approval.

Nov. 10 — FTX US announces it may halt trading on its platform in a few days

According to a banner at the top of FTX US’ website, “trading may be halted on FTX US in a few days.” The announcement urged exchange users to “please close down any positions” they may want to close down, while assuring its users that “withdrawals are and will remain open.”

Nov. 10 — FTX US resigns from the Crypto Council for Innovation

In a statement to Cointelegraph on Nov. 10, CCI CEO Sheila Warren said the council had accepted FTX US’ resignation as an associate member of the group. “We remain committed to working towards building regulation that protects users and safeguards innovation, in order to bring about real change,” said Warren. “The news this week has been shocking, but we’ve also seen the community come together. We have an historic opportunity to get the policies right.”

In a Nov. 10 tweet, Emmer criticized Gensler for “run[ning] to the media” amid FTX’s liquidity issues causing ripples throughout the crypto market. According to the Republican lawmaker, his team was looking into the SEC chair’s alleged collaboration with Bankman-Fried and FTX, but only cited reports presented to his office as evidence without providing details.

Nov. 10 — CZ speaks with president of El Salvador, confirming the country was not exposed to the FTX situation

The CEO of Binance, Changpeng “CZ” Zhao, took to his Twitter account to put rumors about El Salvador’s exposure to the FTX situation to bed, sharing that “the amount of misinformation is insane.” He went on to explain that he had, “exchanged messages with President Nayib a few moments ago,” and that President Bukele had told him, “We don’t have any Bitcoin in FTX and we never had any business with them. Thank God!”

In a Nov. 10 statement, Waters cited FTX’s difficulties as the latest example of incidents “involving the collapse of cryptocurrency companies” and how such events could potentially impact consumers in the United States. The committee chair pushed for legislation establishing a framework for crypto assets, highlighting her efforts with Financial Services Committee ranking member Patrick McHenry in a bill aimed at regulating stablecoins.

Nov. 10 — Blockchain data suggests that FTX may have resumed withdrawals

The exchange’s hot wallet address, which has remained inactive after FTX announced on Nov. 8 it would be halting all user withdrawals, has resumed activities as of 3:50 pm UTC. Blockchain data shows that multiple types of tokens and large sums of transactions have since left the hot wallet, which has a balance of $469 million at the time of publication.

In a Nov. 10 announcement, the FSA said it had taken administrative actions against FTX Japan following FTX Trading Limited’s suspension of withdrawals “without explaining the reasons clearly to investors.” The financial regulator said it had issued suspension orders and business improvement orders in accordance with Japan’s Payment Services Act and Financial Instruments and Exchange Act.

In one of his first public statements since rumors and concerns about FTX’s insolvency flooded the crypto market, CEO Sam Bankman-Fried, or SBF, has said “I’m sorry” In a Nov. 10 Twitter thread, SBF admitted to investors he “should have done better” in providing transparency on the situation with FTX.

Venture capital firm Sequoia Capital tweeted out a letter sent to its partners on Nov. 10 revealing the firm had marked its $213.5 million investments in FTX and FTX US down to $0, claiming them as a complete loss. The letter said that the crisis facing FTX has “created a solvency risk” but claimed its exposure to the exchange is “limited” in its Global Growth Fund III, where its cost basis for the FTX portion of the fund totaled $150 million.

FTX’s website experienced downtime on Nov. 9 for around two hours and when brought back online, came with a warning strongly advising against depositing and that the exchange was unable to process withdrawals.

The warning was further confirmed in a pinned post on FTX’s official Telegram channel with its administrator saying crypto and fiat withdrawals were affected and that they had “no idea” when it would be back online, saying they also “have a lack of information at this point.”

Reports emerged on Nov. 9 that Bankman-Fried asked investors on a call for $8 billion in emergency funding to cover the “liquidity crunch” caused by user withdrawals over the past few days.

Bankman-Fried reportedly was seeking to raise up to $4 billion from investors, and cover the remaining sum with debt financing and even his own personal fortune to make customers whole.

The crypto market responded to the news with investor sentiment turning fearful with Bitcoin’s price hitting a multi-year low of $15,600, analysts expected further downside, suggesting Bitcoin could settle around the $12,000 mark.

Nov. 9 — Binance officially backs out of the agreement

Less than 48 hours after the initial announcement by Zhao that Binance could move to buy FTX, Binance announced on Nov. 9 that it will not be pursuing the acquisition of FTX.

The exchange cited the reported alleged “[mishandling] of customer funds and alleged US agency investigations” adding “the issues are beyond our control or ability to help.”

Late on Nov. 8, a few hours after announcing the deal with Binance, Bankman-Fried deleted his accusatory tweet thread that also claimed FTX and its assets were “fine.” On Nov. 9, the websites for FTX’s venture capital arm FTX Ventures and Alameda were taken offline whilst unconfirmed reports circulated that FTX’s legal and compliance staff quit on Nov. 8. Reports on Nov. 9 began to surface that Binance is possibly looking to back out of the agreement.

In a shock announcement, Bankman-Fried said on Nov. 8 that FTX had “come to an agreement on a strategic transaction” with Binance for the exchange to help cover what he called a “liquidity crunch.” He added “all assets will be covered 1:1” and cited this as the main reason FTX asked Binance to step in.

Zhao said shortly after that Binance had signed a nonbinding letter of intent to acquire the exchange, but noted they reserved the right to “pull out from the deal at any time.”

Some analysts began to warn on Nov. 7 of a significant price drawdown of FTT due to the series of announcements, and early on Nov. 8, the FTT price dove around 30% to around $15.40 from $22 in a matter of hours. The price of Bitcoin (BTC) also started to buckle with fears that FTX could soon be going under.

Responding to a question on Twitter, C signaled his disinterest in taking up the deal earlier poised by Ellison to buy Binance’s FTT holdings for $22 per token, saying “I think we will stay in the free market.”

Shortly after the exchange addressed user concerns, Bankman-Fried fired off a series of tweets saying a competitor “is trying to go after us with false rumors” and added that “FTX is fine. Assets are fine.”

He claimed the exchange has “enough to cover all client holdings,” that it doesn’t “invest client assets” and has been “processing all withdrawals, and will continue to be.” Bankman-Fried said FTX had $1 billion in excess cash and called on Zhao to “work together for the ecosystem.”

With reports and rumors swirling, FTX users began to withdraw their funds from the exchange for fear it would go bust, and commentators implored those who hadn’t already to get their crypto out of FTX.

Reported data from Nansen on Nov. 7 showed stablecoin outflows on FTX reached $451 million over seven days, and users began to report sluggish withdrawals on FTX, with the exchange addressing the withdrawal complaints assuring users everything was running smoothly.

Shortly after Zhao’s Nov. 6 announcement of Binance liquidating its FTT position, Ellison tweeted to Zhao saying Alameda would “happily buy it all” for $22 per share.

Later on Nov. 6, Binance CEO Changpeng “CZ” Zhao said his exchange would liquidate its entire FTT holdings, citing “recent revelations that have come to light” believed to be in reference to the Alameda balance sheet. Zhao said Binance held around $2.1 billion equivalent in Binance USD (BUSD) and FTT due to its FTX divestment last year but didn’t clarify Binance’s current FTT holdings.

He added it would sell the tokens in a way that “minimizes market impact,” expecting the token sales to take “a few months to complete.”

He also confirmed the Nov. 5 transfer of nearly 23 million FTT was part of Binance’s liquidation move.

Zhao added later the move was “just post-exit risk management,” and referred to lessons learned from the collapse of Terra’s Luna Classic (LUNC) and its market impact, as opposed to being caused by a scuffle on Twitter.

Alameda CEO Caroline Ellison tried to quell any panic in a Nov. 6 tweet saying the leaked balance sheet wasn’t reflective of the whole story and noted that sheet, in particular, was only for “a subset of our corporate entities” and other assets worth over $10 billion “aren’t reflected there.”

On Nov. 5, the Twitter account Whale Alert, which tracks significant on-chain crypto movements, notified its users that nearly 23 million FTT worth over $584.5 million moved onto Binance.

At the time, the amount was worth around 17% of the FTT circulating supply.

The saga kicked off on Nov. 2 after reports that a leaked balance sheet from the Sam Bankman-Fried-founded trading firm Alameda Research suggested the company held a significant amount of FTX Token (FTT), the native token of the FTX cryptocurrency exchange.

A large trading firm holding so much of one asset concerned the crypto community and brought questions regarding the relationship between Alameda and FTX.

FTX and Binance’s ongoing saga: Everything that’s happened until now

FTX and Tron Have Launched a Highly Suspicious Withdrawal Scheme

Bitcoin claws back $40K as 24-hour crypto liquidations near…