Working out has become a trending conversation on social network platforms. Exercise, especially indoor-style, is influencing lifestyle amid a wide range of COVID-19 lockdowns globally.

Blockchain.News spoke to Keith Rumjahn, CEO of OliveX and Founder of DOSE token, to explore the potential development of a move-to-earn business model and how cryptocurrency shapes the virtual fitness and sports industry. 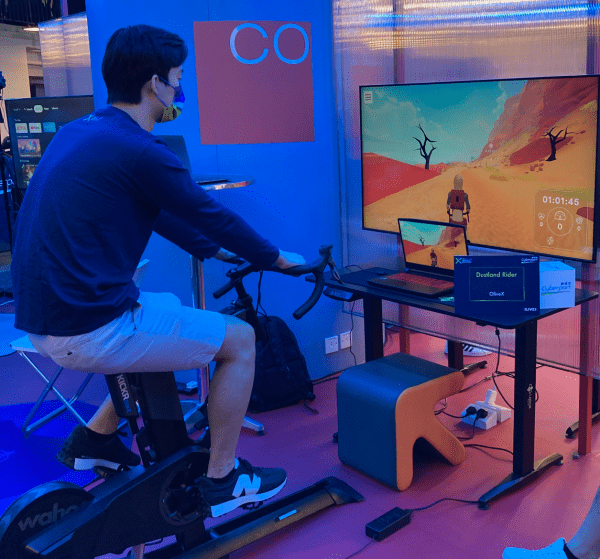 Riding a bicycle is more than just a fun physical activity nowadays as the connection between fitness facilities and personal mobile devices is about to introduce users to a new chapter in the virtual world.

OliveX, a Hong Kong-based fitness startup company founded by CEO Keith Rumjahn in 2017, demonstrated their latest upcoming product, Dustland Rider, in a recent press event in Hong Kong. It provided an alternative way to encourage the public to get into the crypto space by simply riding a bicycle.

By completing specific missions by linking users’ mobile devices, a so-called move-to-earn (M2E) approach and it’s application mechanism so that users can enjoy their fitness achievements in exchange for earning token rewards.

Specifically, the digital health platform designed a series of scenarios with immersive stories and missions for users to experience in the Metaverse while exercising. Users would need to tackle some challenges in this virtual game to win points or tokens; for example, users might be rewarded a unique golden yellow sports suit if they complete riding 100km in the game. 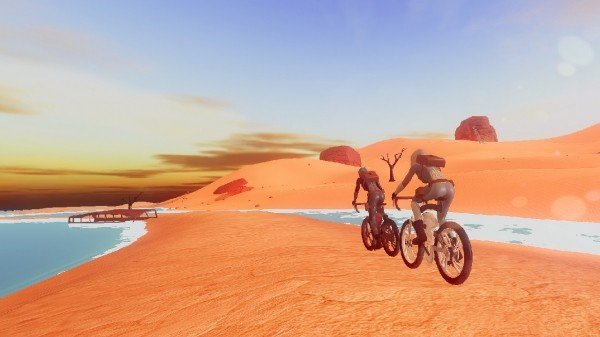 Tokens would be able to purchase additional equipment or upgrades to characters in the game or be traded on the secondary market.

The company said their Dustland Rider would go live soon, expecting to roll out by the end of September or October of this year.

OliveX is a gamified fitness ecosystem to enhance the workout experience through game design techniques and play-to-earn mechanisms, according to its whitepaper.

Prior to launching the Dustland Rider, the company rolled out another similar move-to-earn audio fitness application to the market in 2021, called Dustland Runner, a survival theme-based fitness game.

The official whitepaper reads that Dustalnd Runner is the first proof of workout audio game, allowing players to earn some native token or even gain Non-fungible tokens (NFTs) or other monetary incentives through physical running in daily life. In addition, its NFT, named Kettlemine, can be minted on the Polygon chain, followed by earning more DOSE tokens by burning Kettlemine NFT. 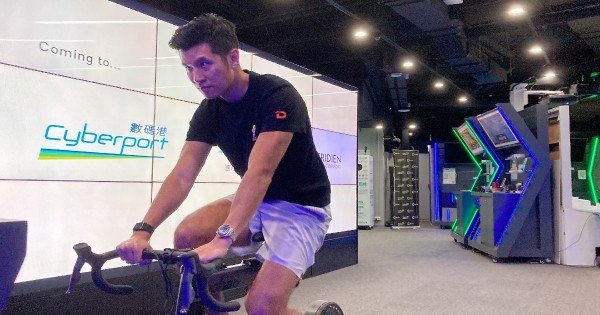 In an exclusive interview with Blockchain.News, Keith Rumjahn, CEO of OliveX shared his journey of running a startup business.

“One of the reasons I founded this company is that I realised some data apps could sell out our exercise data to other commercial companies. As a user, however, we lost our ownership of data ourselves, not aware of (our data) being sold, and even we do not get any benefits or cashback from it,” said Keith Rumjahn.

OliveX’s Rumjahn disclosed that some well-known data-driven service platforms would purchase or utilise these users’ movement data to enhance the purpose of their sale, such as deploying more rental vehicles to a specific area where more people exercise.

On the other hand, the higher traffic acquisition costs for tech giant platforms such as Google or Apple dominating the market is another reason why Keith Rumjahn intends to establish a decentralised platform by himself.

When asked how to differentiate and make the brand more unique to maintain its advantages among competitors, Keith Rumjahn said understanding the gaming lifecycle and the rate of retention among users are critical to designing gaming products, as users typically intend to look for more stylish or trending products within a short period, said Keith Rumjahn; bringing innovation and a fresh product idea would be key elements for OliveX to differentiate their products among competitors.

The sense of business and industry knowledge helped Keith Rumjahn to equip a sensitive awareness to meet customers’ needs. The Canadian Chinese basketball coach and software developer said users normally enjoy the diversity of sports, as some of them would participate in multiple sports within a period of time. The company would develop more types of sports, including Boxing or Yoga, to expand the “portfolio of game, so that users might have more options to choose their own favourite sports.”

Nevertheless, the 37-year-old executive said he hopes the public to build up a regular exercise habit in the long term, “I hope the public would be able to build a healthy lifestyle and regular exercise habit, no matter whether playing our game or not in the future,” which is much more important objectives to him personally while leading the company to keep being competitive among competitors.

The company was acquired by Animoca Brands in 2017 and is a spin-off of the parent company. Over 27% of its shares are owned by the leading gamification platform.

Initially, the former fitness app developer was running a business of establishing smart mirrors. This interactive device can track body movement for analysing body figures with fitness centres before entering the crypto world.

Yet, the pandemic of COVID-19 crushed many fitness centre operations, resulting in massive downsizing or even termination of those fitness centres, forcing OliveX to transform itself again.

Meanwhile, the Hong Kong-based company discovered the potential development in the crypto space later on and declared to list on the National Stock Exchange of Australia (NSX: OLX) in Australia in 2020 and launched its Initial Public Offering (IPO).

The Australian-listed company has been raising over $2.6 million between 2017 and 2018 over the last three rounds, according to Fobes.

Furthermore, the company realises the potential business development in the crypto and virtual economy. Senior management decided to expand their footprints in the virtual space.

Gamification could be an easier way to convince sports lovers who do not become familiar with cryptocurrency to get into virtual sports in the Metaverse. A recent survey by ChianPlay suggests that 75% of investors join the crypto space because of GameFi.

Unlike other traditional or developed fitness applications in the market, OliveX launched its native token called DOSE for its M2E in 2021, which can be traded on at least three major crypto exchange platforms, including OKex and Gate.io and KuCoin, at over $54 million fully diluted market Cap currently, according to data platform provided by CoinMarketCap.

Keith Rumjahn said their launching of Initial Coin Offering (ICO) is even earlier than their main competitors, including STPEN, Solana-based move-to-earn apps.

DOSE is the major trading medium within its ecosystem, allowing users and investors to unlock items, purchase NFT or join special events and game modes, according to its whitepaper.

In introducing why OliveX listed their own native token-DOSE, rather than adopting other mainstream or benchmark tokens, Keith Rumjahn Rumjahn said DOSE as an Ethereum-based token, “we wish to build our own specific token in terms of fitness,” adding that “adopting those mainstream or benchmark tokens might be hard to maintain its balance of internal economy (of the game)”

“Many games (developers) would generate their own tokens to each different game but might not be connective to each other. DOSE token would connect all the products instead, including Dustland Runner and Dustland Rider,”

Subject to the character of the volatility among tokens in the crypto market, Keith Rumjahn further explained that that would be more difficult to peg with their products if they adopted other tokens. A consistent token would be necessary to maintain the stability of the product price and their “in-game economy.”

Keith Rumjahn believes the external and floating price of its token in the market would not undermine the company’s performance, adding that he would not set any targeting price for DOSE as the milestone for the long-term achievements.

Subject to recent crypto winter influenced by the collapse of LUNA and UST, most of the leading benchmark tokens sank from their all-time-high,

Regarding risk management, Keith Rumjahn said the company has the expertise teams in managing risk and the tools of treasury governance for financial operations, whether in the stock market or the crypto market. The company is confident in avoiding liquidity risks from the crypto market, backed by Animoca Brand’s liquidity pool, especially to strengthen its liquidity when necessary.

As a result, the fitness-based company could concentrate its resources on game development, “Our capital is mainly used for operating the game, rather than putting them for investment-purposed,” added Keith Rumjahn.

The fitness-based company also shows its ambition by entering into the Metaverse. OliveX enjoys a 12X 12 land plot on the Sandbox, where the company is establishing a virtual entertainment and even virtual Sales space, according to the official whitepaper.

By introducing strategic partners, including Stages Cycling, TRIB3, and TRAX, the company aims to bring digital fitness experience and NFT collectables to the Metaverse community.

Through partnerships with some local fitness brands, the company believes that would be an effective way to attract sports lovers to join the Metaverse, who are outsiders to this industry.

OliveX intends to overseas market in the long-term, including Japan and South Korea, by recruiting local operation teams for community management.

In terms of investment, that would be great to allow companies to invest in crypto-related industries or startup companies in terms of licensing so that more capital from the top-end might penetrate to the bottom-end side of the business.